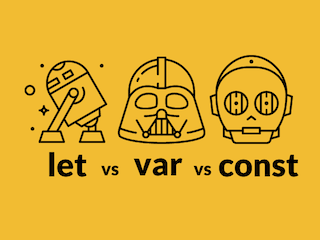 There are two ways for declaring a variable (let and const) plus one that has become obsolete (var).

let declares and optionally initializes a variable in the current scope. The current scope can be either a module, a function or a block. The value of a variable that is not initialized is undefined. Scope defines the lifetime and visibility of a variable. Variables are not visible outside the scope in which they are declared. Consider the next code that emphasizes let block scope:

In contrast, the var declaration had no block scope:

const declares a variable that cannot be reassigned. It becomes a constant only when the assigned value is immutable. An immutable value is a value that, once created, cannot be changed.

The initialization of the const variable is mandatory.