Unit tests are important. They prevent regressions as you refactor code, serve as documentation, and save you hours of time not spent doing tedious manual testing. In short, tests enable change.

But how much attention to cleanliness do we give our tests? We refactor our app’s production code, give descriptive names to variables, extract methods for repeatable functionality, and make our code easy to reason about. But do we do the same for our tests?

So, how do we keep our test code clean? Let’s consider some ideas below.

Tests should be structured according to the Arrange-Act-Assert pattern. This pattern goes by many names and is sometimes referred to as the Build-Operate-Check, Setup-Exercise-Verify, or Given-When-Then pattern.I prefer Arrange-Act-Assert for the alluring alliteration. Regardless of what you call it, the pattern looks like this:

In the React world, applying this pattern when testing a simple toggle button component might look like this:

We arrange our code and act on it all in the same line by rendering the ToggleButton component. We then make assertions on the output that it renders a button to the DOM and that the button’s text is visible on the screen. A more complex example might look like this: 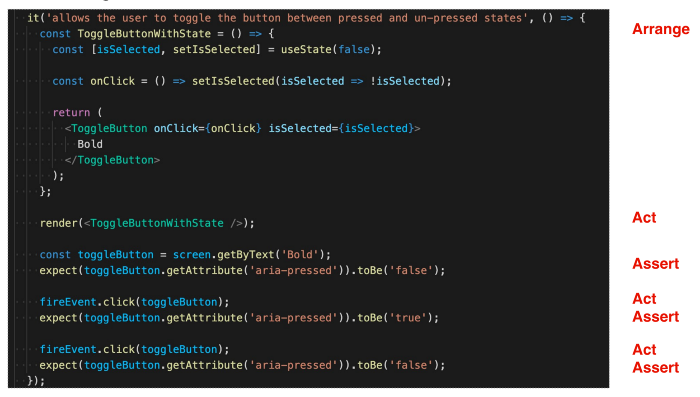 It’s important to note here that you should generally only be writing code for the Arrange phase at the beginning of each test. After that, it’s OK to cycle between iterations of Act and Assert. But if you find yourself back in the Arrange phase later on in the test, that’s probably a good sign that you’re testing a second concept and should move that to a separate test. More on this later.

Test object builders are methods, classes, or constructor functions that allow you to created commonly needed objects. For example, you might often be working with a User object that contains all sorts of data about any given user. This could include a first name, last name, email address, phone number, mailing address, job title, app permissions, and much more. Creating a new User object in each of your tests could easily take several lines of code, leading to an unwieldy test file hundreds of lines long.

Instead, we can keep our test code DRY by creating a helper test object builder method that returns a new User object for us. Even better, we can allow the default values to be overridden for when we need to be more specific about the properties used in the object.

One library I find especially helpful is the faker.js npm package. We can use this package to generate mock data for all sorts of different fields like firstName, jobTitle, phoneNumber, and more.

Consider this example for a User test object builder:

Evaluate a Single Concept per Test

Each test should verify only one thing. Don’t try to test several things all in the same test. For example, a bad test for a date picker component might read something like “renders in various states” and then render eight different date pickers to illustrate the differences. A test like this is doing too much.

A better test would be more specific — something like “renders the date picker when the user clicks the text input.”

Tests Should Be Fast

In the JavaScript world, running Jest tests in watch mode while you develop is a game-changer.

## Tests Should Be Independent

Tests should be able to be run in any order. In other words, any given test should not depend on the test before it. If you’re not careful in doing a proper teardown or cleanup between tests in your test files, you may end up modifying global variables in one test that then affect subsequent tests. This can lead to unexpected behavior and headaches. It’s always a fun debugging adventure when a single test passes when run in isolation but fails when run as part of the test suite.

If you’re using Jest, the setup and teardown is typically done in beforeEach and afterEach code blocks. It’s also helpful to remember that each test file gets its own instance of JSDOM, but tests within the same file share that same JSDOM instance.

Tests Should Be Repeatable

Tests should be able to be run in any environment. If the test suite passes on my machine, it should pass on your machine too. That also means it should pass in the CI pipeline. When tests are repeatable, there are no surprises where a test passes in one environment but fails in another. Flakiness like that decreases your confidence in your tests.

## Tests Should Be Self-Validating

Tests should return a Boolean. Either the test passes or it fails. You shouldn’t need a human to interpret the results of the test. This is one of many reasons why snapshot tests suck and should be avoided.

Snapshot tests don’t tell you what the correct output should be. They just tell you that something is different. It’s up to you as the developer to decide if it’s intentional that the snapshot changed or if this is an error that needs to be addressed. Oftentimes, though, what ends up happening is that developers blindly accept the changes to the snapshot and assume that the new snapshot is correct.

## Tests Should Be Written in a Timely Manner

Make Sure Tests Fail When They Should

Have you ever come across a test that doesn’t test what it says it does? The test may be passing, but it definitely doesn’t test anything meaningful or what it claims to. Tests like these create a false sense of confidence. Your test suite is passing, after all!

Consider this quote from Martin Fowler:

“I like to see a test fail at least once when I write it.”

Those are wise words! It’s easy to verify that your test is doing its job by making a slight modification to either the test code or the production code to change the output to something intentionally incorrect. If your test fails, great!

Don’t forget to change your test back to get it passing again after doing this sanity check, of course.

Remember To Test Your Edge Cases

It’s a rookie mistake to only test the happy path. In addition to making sure the normal behavior works, try to consider ways in which things could go wrong. What if someone provided invalid arguments to your function? Or perhaps unexpected data types?

Consider this example scenario: You’re writing a function that returns the type of a triangle based on the value of the length of the three sides of that triangle. We’ll call the function triangleType, and it’ll have three parameters so that the function signature looks like this: triangleType(side1, side2, side3).

What cases would you test for a function like this? 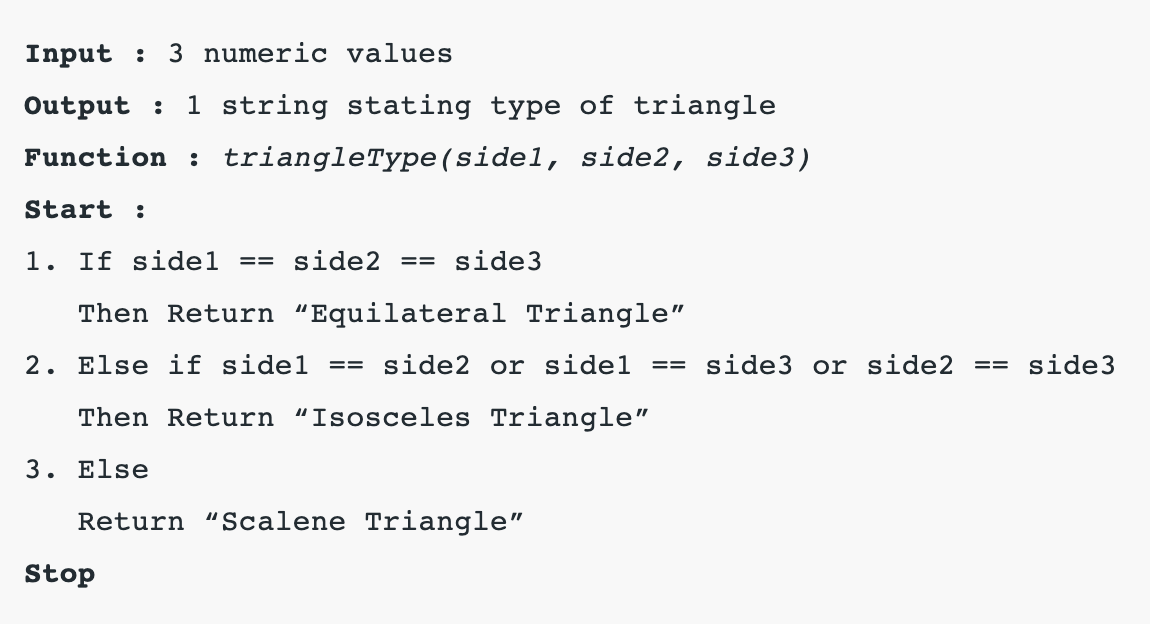 Interestingly enough, testing those three cases would give you 100% code coverage based on the current implementation of the function. But these three tests alone are not enough.

What if, for example, all zeros were provided to the function? That’s not a triangle. That’s a point. But the function would identify that as an equilateral triangle since all sides are equal.

What if negative numbers were provided to the function? A triangle can’t have negative lengths. That doesn’t make any sense.

Or what if two of the sides were much shorter than the third side? Then the sides wouldn’t connect, and we wouldn’t have a triangle.

As you can see, it’s essential to test more than just the happy path in your code.

Test the Things You’re Most Worried About Going Wrong

I like to shoot for 100% test coverage, but it’s important to not be dogmatic about this number. There is a law of diminishing returns, and each additional test adds less and less value. If you have 95% code coverage, it might not be worth it to get that last 5% of code coverage. Not everything is worth testing.

The important thing is to test the critical parts of the application. What are the areas of your code where you’re most concerned about things going wrong? Focus on having good tests in place for that core functionality first. Then write additional tests to cover less critical paths. But as you do so, remember to focus your tests on specific behavior and product requirements — not just on getting that last hard-to-reach line covered.

You made it! If you need a quick refresher on everything we’ve covered in this article, here are my unit testing tips and tricks for clean code: